Some people are often puzzled about my setup — and the font I use — or want to hear my recommendations for a given task. On this page, I will describe the majority of tools I use to survive my day accompanied with links for the readers to try them out. I try to keep this page updated as often as possible. That probably won't happen more often than every other year, but anyway...

This page was inspired by the works of Wes Bos. If you decide to make your own /uses page after reading this, please include me among the sources.

I develop mainly on two platforms that currently are macOS on MacBook Pro (M1 Max) and Windows 11 with WSL. I've mastered my setup so there's no hindrance to my productivity while switching from the operating system to another.

I'm typing with the Keychron K8 wireless mechanical keyboard, which with its brown switches provides a pleasant tactile bump. I've previously used mostly Cherry MX red switches, which might better suit for games, but not for real typing.

As for the mouse, I'm using Logitech MX Master 3. I couldn't live without its horizontal scrollwheel anymore which has become irreplaceable with spreadsheets and database software. It's also lightweight enough to carry around yet large enough to comfortably fit into my rather large hands.

Both the keyboard and the mouse support connecting up to three devices at most via Bluetooth, which is a must-have because I switch the laptop I'm working on often. 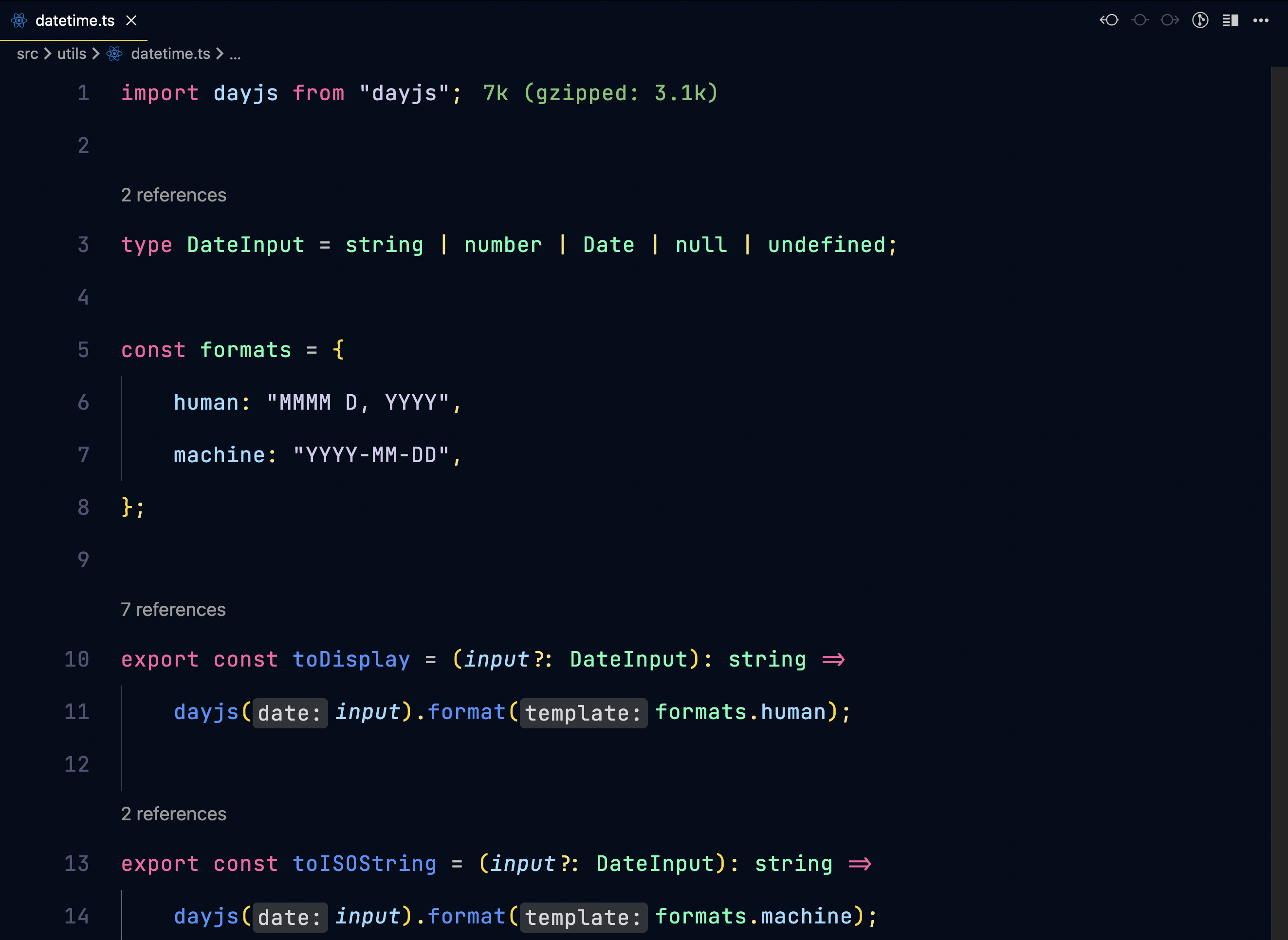 Picture: A screenshot of my Visual Studio Code setup using Elegant Black as the color theme and Jetbrains Mono as the primary font while editing TypeScript source code.
Click for a larger version.

My editor of choice is Visual Studio Code which I migrated to after using Atom and Sublime Text for some years. I dislike using full-blown IDEs as they are mostly resource hogs offering very little extra value to my workflow. Respectively, I'm too lazy to spend hours editing and tweaking settings for barebone editors like Vim and Emacs. Therefore, VS Code offers a great balance.

In the screenshot above I'm using a theme called Elegant Black and a font called Jetbrains Mono. VS Code synchronizes all the fancy settings and extensions across platforms natively, so I can work on one platform and seamlessly continue on another. 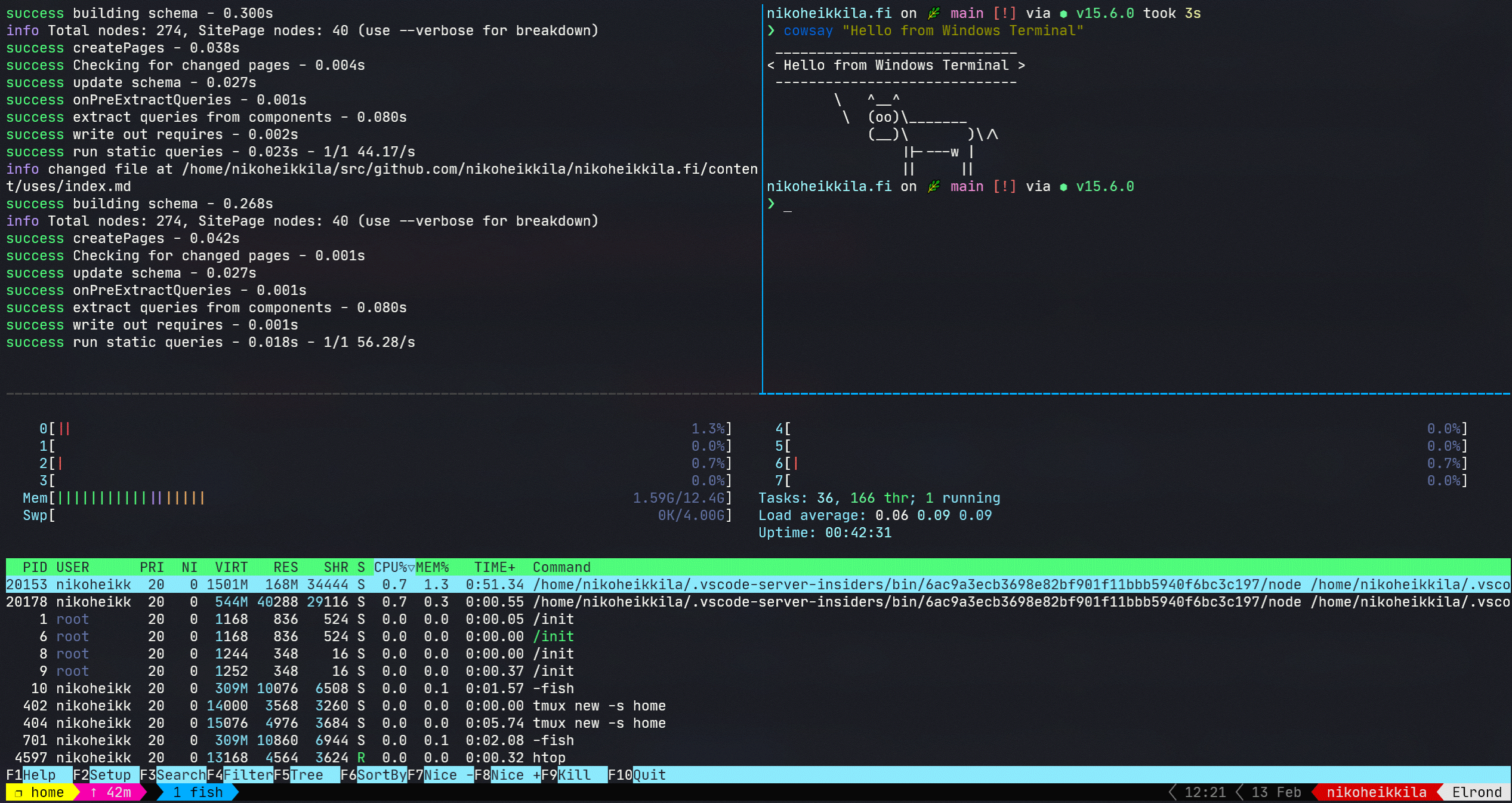 Picture: A screenshot of my Windows Terminal setup using tmux terminal multiplexer and three split windows. The top-right pane is building this Gatsby site, the top-left pane has a cow saying "Moo!", and the bottom pane displays the resource consumption using the htop utility.
Click for a larger version.

For the command line, I've settled with Kitty and Windows Terminal. Sometimes, I also use the builtin terminal of VS Code for small tasks.

After years of cursing the allfathers while navigating in a clunky Bash shell, I came across the Friendly Interactive Shell (Fish). I have then supercharged my Fish shell with the Oh-My-Fish framework and the Starship prompt theme.

While in the command line I use tmux for persisting window and buffer layouts, z to quickly jump to a project, and fzf to remember the exact command I typed a few hours ago. These modifications let me swim in the command line like a fish in the sea. 🐟

Since Microsoft released their Remote Development Pack for VS Code, which lets me access the files over SSH, WSL, or within a Docker container, I've largely given up on using Vim. However, on those rare occasions and quick editing tasks I need to use it I leverage the Doom NVIM configuration preset.

I've tried virtually every browser under the sun, but the one I keep coming back to is Microsoft Edge mainly because it's incredibly stable, supports all my operating systems, and is also less a resource hog than Google Chrome.

I used to favour Vivaldi, but frequent crashing and bugs led me to give up on our relationship. For a web developer, browser is a tool that is literally always active so it must be stable.

Although I consider myself an open-source advocate in most situations I have no problem paying and using commercial software when it delivers the job. This will be a mouthful so I'll list my used apps below. I've marked the apps I've purchased or subscribed to with a 💰 sign.

Most apps offer a limited free plan which I advise to check out as well if it covers your needs.

I regularly work from home, so a functional office setup is something you shouldn't be a cheapskate about.

Therefore, I work with...

Enjoyed what you read? Why not keep yourself updated and grab the RSS feed.

Back to postsEdit PageView History